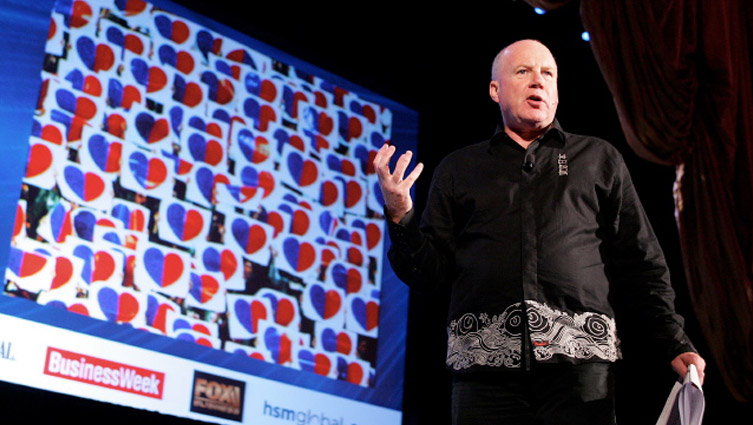 As an entrepreneur, you probably spend a lot of time obsessing over data and metrics. And that’s all necessary if you want to build a solid, competitive brand. But if you want to create an epic, long-lasting brand, if you want to start a social movement, then you had best start making some decisions with your heart.

“If you are an entrepreneur, you are in the action business. You are trying to sell people, move people, spend, pay, decide!” says Kevin Roberts, the global CEO of advertising juggernaut Saatchi & Saatchi. “There is no time for rational thinking. Make the big decisions with your heart, the little ones with your head.”

Saatchi & Saatchi, which Roberts has led since 1997, works with more than half of the biggest 50 advertisers in the world, including the likes of General Mills, Lexus, HSBC, Visa and Toyota.

Born in England, Roberts, who didn’t finish high school, worked as an advertising executive all over the world. At the age of 32, he landed a gig as the CEO of Pepsi-Cola in the Middle East and has since become a force in the world of advertising world. His industry-shifting book, Lovemarks: The Future Beyond Brands, published in 2004, has been published in 18 languages.

Roberts argues advertising needs to do one of three things: make you laugh, make you cry or make you think. In other words, it needs to engage people on an emotional level. “I think building brands is dead, and now it’s about creating a movement. Apple is not a brand, it’s a movement. Samsung is a brand.”

One of Roberts’ all time favorite ads is a New Zealand Telecom commercial called “Father and Son”, which tracks the relationship between a man and his son over time. The son eventually has a child of his own and grows to look just like his father did at the start of the commercial. The ad has the effect of turning the telecommunications company into a company that represents staying in contact with your family. Roberts says the commercial tends to make people cry, and then go call their dad. Which is exactly the point.

Emotion makes people act. Which as an entrepreneur, is exactly what you want to be tapping into.

Watch this video to hear Roberts explain how blockbuster companies get customers to be devoted “beyond reason.” Put your excel spreadsheet away and start generating ideas with your heart.