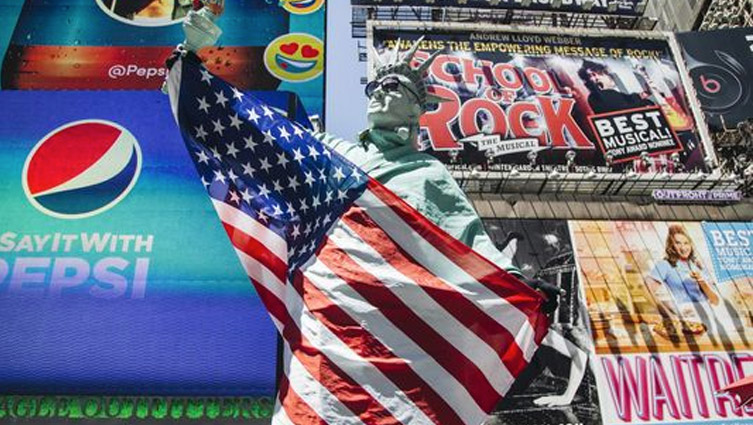 I’m an English-born New Zealand citizen with homes in Arizona and Tribeca, New York. I head a New York-based global communications network owned by the French. Do these entanglements qualify me to write about A.T. Kearney’s America@250 initiative? In the spirit of freedom and opportunity, I’m hoping so.

My gravitational pull has always been to the edges, the fringes, the margins. It is from here you can best observe, listen, consider, plan and prepare for action. In so many ways, America represents the center: the biggest, the best, and the brightest. Yet in contemplating America’s 250th birthday in 2026, I find it remarkable that two of today’s most-watched television programs are a zombie-infested dystopia on the one hand and a power-mad medieval realm on the other.

It’s been long remarked upon how our best sci-fi, horror, and fantasy shows reflect the deepest fears of the culture. (I’m thinking here of Invasion of the Body Snatchers as a parable of communist infiltration and Godzilla & Co. as stand-ins for nuclear catastrophe.) The Walking Dead is a thrilling show, but what does its message of eat or be eaten have to tell us about our societal temperature? And Game of Thrones? As Clive James recently put it in The New Yorker, the show’s great lesson is that its shrewd, heroic, deep-feeling dwarf is “bright enough to see the world’s evil but not strong enough to change it.” Brilliant entertainment that present twin portraits of lands where everything is broken and all systems fail, The Walking Dead and Game of Thrones speak not to the American Dream but to the American Nightmare.

What does the Millennial generation (defined as 18- to 34-year-olds), now the largest living generation in the U.S., make of our national dream? A telling anecdote: when asked what the American Dream means to them, a group of young people I spoke with wondered if it was the name of a racehorse, a game show, an anti-depressant? The American Dream – what Nobel Laureate Saul Bellow describes in The Adventures of Augie March as “the universal eligibility to be noble” – simply did not apply to them.

If Millennials think of themselves as wandering around in a Walking Dead world, however, they’re honing some marvelous survival skills. The first generation of Americans that’s unlikely to do as well financially as their parents, Millennials have adapted in ways that include embracing the sharing economy, enjoying the benefits of greater mobility and free content, and generally accepting a less materialistic and more politically tolerant attitude than their elders. What Millennials have figured out is something I’ve spent my entire career rooting out: it all comes down to purpose.

When pundits and politicians talk about America’s surging or waning competitiveness on the world stage, you hear a lot about GDP, Fortune 500 companies, military spending, population growth, the prominence of our schools and universities. Those things are good and important supporting points, but they are not the same as an inspirational dream. Look past the data. It is the idea of America that makes it a once-in-a-millennium historic phenomenon and force of good in the universe.

America, above all else, is a story. It’s a story the nation tells itself and tells the world. In a New Yorker essay Storyteller-in-Chief, Pulitzer Prize-winning novelist Junot Diaz writes about how “one of a president’s primary responsibilities is to be a storyteller… If a president is to have any success, if his policies are going to gain any kind of traction among the electorate, he first has to tell us a story.”

In an increasingly crazy world, it is imperative that leaders be great storytellers. We see this in FDR’s fireside chats during WWII. During his 2008 candidacy, President Obama was able to inspire hope and dreams in a new generation of voters that through the example of his personal story – the American Dream made manifest – he might be able to single-handedly repair the terrible fissures in our governance. And that storytelling impulse is front and center in the nation’s founding documents. People invoke the Declaration of Independence, the Constitution, and the Bills of Rights as if they are Biblical texts come down to us from on high. The spirit of the Constitution – the way it acknowledges human fallibility and weaves the necessity for reconsideration, change, amendment into its very fabric – is not so much didactic or political as it is novelistic. The Founding Fathers were great storytellers! They created the freest country on earth through language. (Among its many attributes, the phenomenon that is Lin-Manuel Miranda’s Hamiltonunderscores this: the overflowing love of language is the reason that rap is the perfectly suited vehicle for this great musical.)

When Gallup Research finds that U.S. confidence in Congress is only 8% and in the presidency 33%, when America’s Dad stands accused of being a serial sex offender, how can the country’s core institutions and corporations begin to rebuild trust and connections? As the Founding Fathers knew well, revolution begins with language. Language drives purpose, perception, action and outcomes. A Machiavellian, Game of Thrones world needs more optimistic, uplifting language, a stronger sense of purpose, more inspirational storytelling.

We need a new Inspirational Dream for the United States of America’s big birthday. Something that unites all of our citizens and represents a rallying cry for our place in the world. Crystallizing an idea that vast into a single line is a challenge worthy of a poet laureate. Well, everyone hates a coward, so here’s my starter attempt: Create a harmonious and sustainable country that shines as a beacon for good in the world. By “harmonious” I mean the requirement to represent all the people, not special interests. By “sustainable” I mean “thriving in perpetuity,” without fear of collapse or insolvency. And by “shines as a beacon for good,” I mean to always aspire to do what’s right, even when no-one’s looking.

Is there deep-rooted distrust of our great academic, business, and cultural institutions? Are we seeing in this year’s presidential cycle a wave of insurgency that speaks less to divisions between Red and Blue, rich and poor, than general contempt for longstanding political traditions? Are there critical issues that need addressing like failing infrastructure, incarceration, income inequality, climate change, guns and civil rights? Most definitely. But considered on the world-historic stage, America is a teenager—it’s young enough, optimistic enough, resilient enough to absorb argument and tough self-analysis and push ahead.

America will be 250 years young on July 4, 2026. Should we look upon that calendar date with boundless confidence? Grave concern? Or, worst of all, profound indifference? Me, I’m not just an optimist, I’m a radical optimist! As Colin Powell said, “Perpetual optimism is a force multiplier.” Come the sestercentennial, I’ll be waving the Red, White, and Blue, playing Springsteen loud, and getting my bottle rockets ready. Because our national story is still being written. And it’s a great one.

Kevin Roberts is executive chairman of Saatchi & Saatchi, Head Coach of Publicis Groupe and the author of 64 Shots: Leadership in a Crazy World.