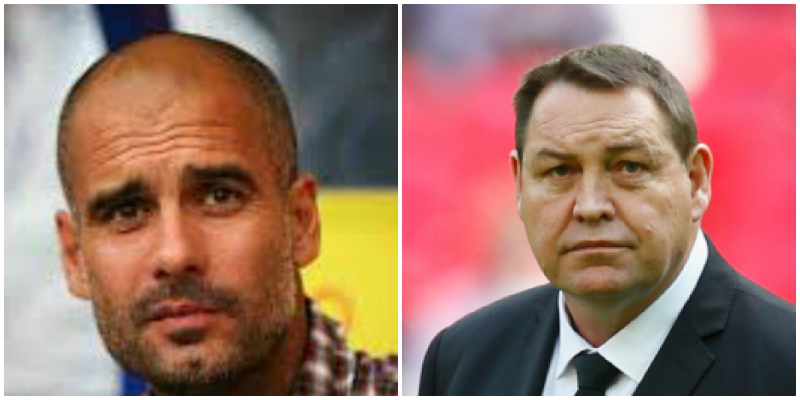 Whilst the All Blacks have been resting, refreshing and recuperating, my other favourite sports team, soccer’s Manchester City, has been running amok in Europe.  As I watched them take Spurs apart 4-1, I was struck by how similarly both my teams, City and the All Blacks, are playing.  I watched the game at The Etihad with old school friend Brian Ashton, ex-coach of Bath, Ireland, and England – and today a mentor of coaches in both football and rugby, and a total believer in the All Blacks’ way – and the Pep Guardiola Manchester City way.  This article will look at an analysis Brian completed of the approach Manchester City are taking and how it relates to Steve Hansen’s All Blacks approach.

First, the results.  We’re all familiar with the Hansen stats – the World Cups, the Rugby Championships, the record-breaking unbeaten streaks, the unbeaten tours, the points differences, the number of tries scored, the world No. 1 rankings – and here are Manchester City’s 2017 / 18 results under the world’s Number One coach – Pep Guardiola.  As I write this, we are 24 hours away from a difficult away fixture at Jürgen Klopp’s resurgent, dangerous Mo Salah led Liverpool.  City are unbeaten in the English Premier League, the world’s toughest league, have won the most ever consecutive games – 18, have made the best ever start to the League with 62 points out of a possible 66 at the half-way stage of the season, and are on track for a record-breaking 107 points for the full season.  They have won 20, drawn 2, lost 0, scoring 64 goals while conceding only 13.  Pep Guardiola has won a record 4 consecutive Manager of the Month awards, 3 City players are among the League’s top 10 goal-scorers and they are alive in all 4 competitions – topping the League 15 points ahead of Manchester United and 16 points ahead of Chelsea, in the semi-final of the League Cup, in the last 16 of the UEFA Champions League, and in the 4th round of the FA Cup.

And how have they become so dominant?  By playing the game as the All Blacks.

A game of high tempo speed sport with high skills and sophisticated simplicity the key.  Both teams find the gap, execute passes with one touch, quickly, technically and instinctively.  Orderly chaos is imposed, everyone attacks, everyone is dangerous, everyone scores, everyone defends, everyone wins the ball back once lost.

Brian Ashton is a huge believer in Mindsets – and he believes both coaches share similar mindsets.  They are both COPS – Confrontational, Opportunistic, Pioneering and Sensational.  Their approaches – and players – are driven by the constant repetition of their ABC’s – Ambition, Belief and Courage – and their players demonstrate all 3, especially when under pressure, when they are behind on the scoreboard, when time is running out.  Their responses are identical – stick to the plan, trust your team mates, press, attack, score, win.

The ABC’s are supported by an Action set of Clarity, Intensity and Accuracy – everyone knows their role, knows how to execute it and relishes the challenge of pressure – which is viewed as a privilege, not a problem.

I have season tickets at The Etihad and watch every game City plays, live or on TV.  The same applies to the All Blacks.  When you watch these games live it is striking how similarly the two teams perform.  And it’s also interesting to see how opposing coaches respond to the A.B. / City approach – inevitably it is a response of damage limitation, confinement, restriction, power – few have tried to out-skill / out-pace / out-attack either team – but City awaits Paris St-Germain, Barcelona, Real Madrid, and the AB’s saw Scotland give it a go and maybe the Wallabies will regain the Campese / Horan / Little flair in 2018.  Until then we’ll just have to keep attacking against the power games of Eddie Jones and Joe Mourinho – and keep the Faith.

The common performance threads between the All Blacks and City were summarised by Brian as:

Playing with Depth and Width,

Both teams play on the edge, with no fear.  They play with eyes wide open, with heads up and can score from anywhere.

If you get the chance to watch Manchester City, take it.  It’s what the All Blacks would look like if they were a football team.