Home / Blog / Got To Try And Stay Positive

Got To Try And Stay Positive 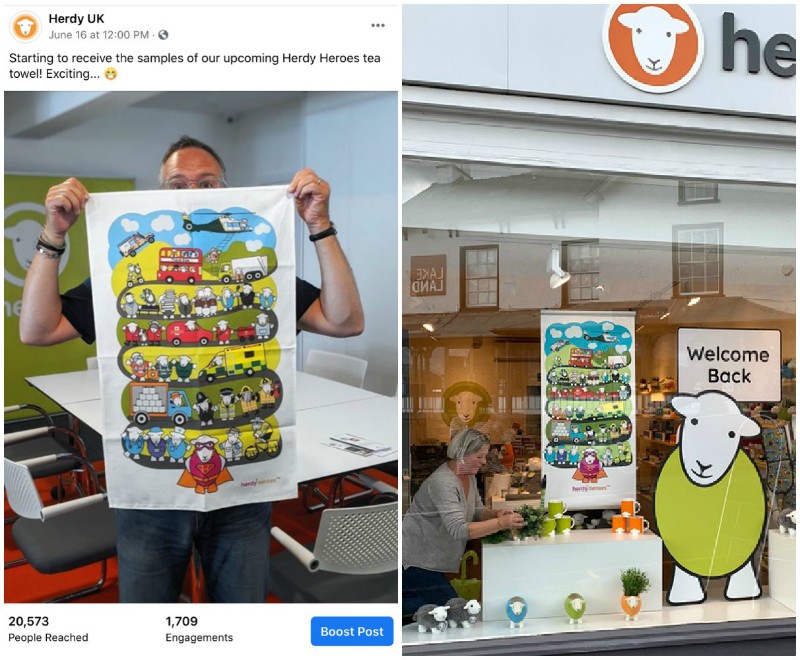 Here’s a positive blog from Spencer – half of the dynamic husband and wife team that created a Lovemark in the UK Lake District – Herdy.  I’m privileged to be part of the Herdy gang (flock) and have been impressed with the team’s Survive / Revive / Thrive strategies and execution.

Here – in Spencer’s words – are some points for EWE to consider.

Recently interviewed by a local radio station, I was asked about the lead-up to the reopening of our retail operation in the Lake District. Nine questions, most of which focused on the effects of the last twelve weeks and the on-going worry and paranoia for local business and community. In thick black marker pen I wrote each of the questions as headlines on nine sheets of A4 and laid them out in a long line on our board room table then stared at them for a while. Thoughts ran amok in my head. Things that I’ve read and heard recently. Things like local stakeholders communicating messages such as ‘Together We Stay Apart’. The fact that most people appear, at least, to be watching what the other man does before they make their move. The fact that little or no compassion is recognised and responded to quickly enough about those who’ve just had four walls to stare at, denied air to breath and space to see. I decided to try and flip the negatives into positives.

Covid-19 has affected everyone everywhere – and everything we all do. Naturally we’re all worried. None of us are complacent and we all have to be careful. The stark reality of what our business is facing was measured at the beginning of lockdown. We chose to act fast. Diane and I implemented a survival strategy (with Uncle Kevin’s guidance and beady eye). It wasn’t nice, it wasn’t easy and it included some tough decisions but it worked and we’re ok. Something else happened for Herdy in lockdown. A chance often pushed aside by typical day-in-the-life business. A chance to have a speed date with ourselves and re-understand who we actually are again. To take our thoughts, ideas and operation down the gym. We’re fitter, leaner, sharper. We’ve acted faster. We’ve discovered new audiences and they’ve discovered us.  We’ve reached out to new communities and groups (we’ve made heroes out of some of them). New opportunity has been cracked open out of all this madness. A retained, small, tight-knit (and slightly knackered) creative and communications team have been pumping out positivity across all our digital channels non-stop for the last three months and we’ve received it back in spades. It’s been amazing.

So now we’re in Revival mode. We’ve decided to move early. Be open as soon as we can be. Our shop windows have big Herdy’s saying ‘Welcome Back’ in big speech bubbles. It’s all a bit of a balancing act right now. We’ll have to measure everything week-on-week rather than the usual quarter-on-quarter. There’s stress on the team – doing more with less. The energy and drive we need to keep going isn’t coming from government or assuming things will eventually come round. It’s coming from the support, love and kindness of our fans and followers, old and new and we thank them for that.

Stay on guard. Persevere. Be Persistent. But most of all do things in your business that will fuel positivity.