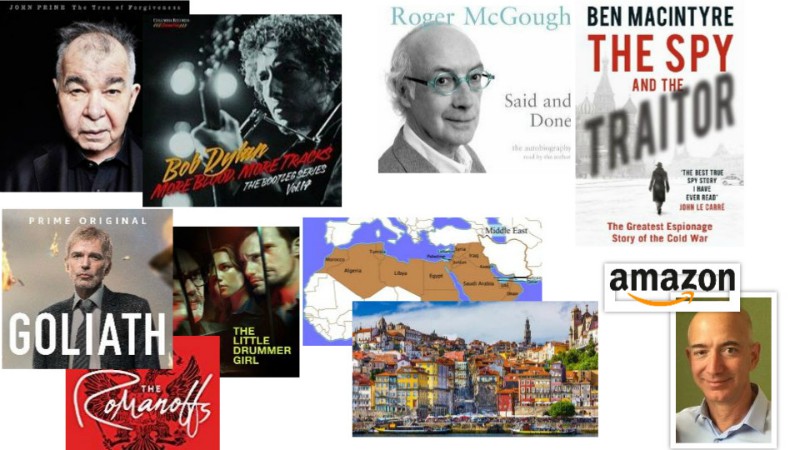 I was asked a few questions last week by a group of leaders from Lancaster Royal Grammar School.

What am I listening to?

–      John Prine – The Tree of Forgiveness.  His first original album since 2005 – am going to see him with my Country sidekick Robin in Phoenix later this month.

–      Bob Dylan’s latest bootleg of one of my favourite Dylan albums – More Blood, More Tracks – his 14th published bootleg.  A genius.  (How did ‘Up to Me’ not make the original Blood on the Tracks album?)

What am I reading?

–      Roger McGough’s biography ‘Said And Done’ – author of one of Britain’s top hundred favourite poems (Let Me Die A Youngman’s Death) – leader of the Liverpool poets, author of 1967’s The Mersey Sounds (I’ve still got my first edition paperback), member of The Scaffold and the working-class man’s Poet Laureate.

–      The greatest Espionage story of the Cold War “The Spy and the Traitor” by Ben Macintyre.  A true story about a KGB double agent.

What am I watching?

–      The Little Drummer Girl (iTunes) – the BBC mini-series of John Le Carre’s great book.  Complex, not easy to follow – but worth it.

Where have I been recently?

–      Back to the Middle East (Tunis, Kuwait, Oman, Dubai, Cairo and Beirut) and to one of my Lovemarks, Porto.  Off to Surfers Paradise this week with a couple of grandkids (Tilly Plum and Winnie), then LA and Christmas in the desert in Arizona.

What am I studying?

–      Hayden Wilson, a young teacher, leader and friend from Melbourne sent me a folder of all Jeff Bezo’s annual letters since his first in 1997.  Fascinating.  There goes my next Sunday.