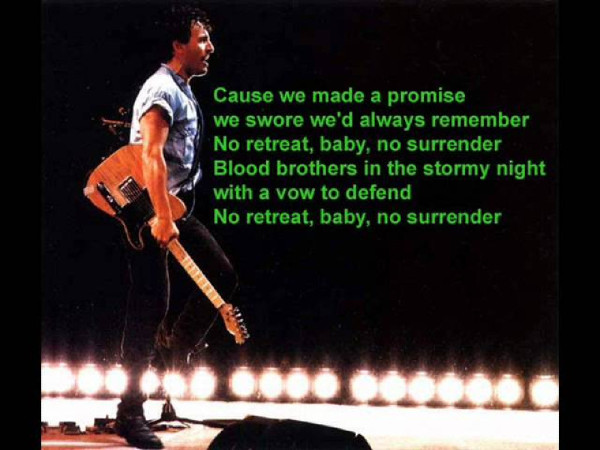 Following my recent post – No Surrender – here’s a post from four years ago which started with that very song.  What are your top ten?

Thanks to Steve Jobs, we no longer have to concern ourselves with taking 10 songs to our desert island. Now, if we feel like it, we can take 10,000. But don’t panic, here are my all-time Top 10 best songs.

10. No Surrender
The Boss plays this fast, he plays it slow, and no matter what the tempo, it still rings true. “I learned more from a 3-minute record than I ever learned in school.” There is also a great line along the lines of “these romantic dreams in our heads”. I love the ‘No Surrender’ attitude. It’s not too far away from Saatchi & Saatchi’s ‘Nothing is Impossible’. This will always be a Top 10 song for me.

9. You Still Believe in Me
From the great Brian Wilson’s Pet Sounds album. I’ve seen Brian Wilson at the Roxy in LA and my son, Ben, and a couple of his mates went to see him last month in London. There he was belting out songs from the Pet Sounds album and a medley of Beach Boys greats. Wilson has lived the hard life of an artist, but there is no doubt that some of his writing and arranging will last forever. ‘You Still Believe in Me’ is a beautiful little song and always reminds me of the many people that have believed in me during my ups and downs.

8. Celluloid Heroes
A song by one of the world’s greatest storytellers, Ray Davies. The front man for The Kinks is still going strong with a new album currently out, but his heyday was in the 60’s and early 70’s. That was when he captured that very English spirit of Bulldogs and Union Jacks in a way no one else ever did. Ray Davies wrote some of the great songs of that era, including ‘Well Respected Man’, and ‘Dedicated Follower of Fashion’, which were sound bites for the Carnaby Street of 1967. ‘Celluloid Heroes’ broke into my consciousness before I had ever been to the US; it made me want to visit Hollywood right there and then. “Everybody’s a dreamer and everybody’s a star.” You could put me down for dreamer.

7. A Whiter Shade of Pale
At the Oscars a few years back, I was at an after party and bumped into the lead singer of Procol Harum. ‘A Whiter Shade of Pale’ must be one of the most loved and most difficult to understand set of lyrics the world has ever been given. It’s one of the defining songs of the 60’s and recently has been the subject of a bitter lawsuit between two of the members of Procol Harum. Almost everybody from that generation can sing the first verse, particularly late in the evening after a couple of bottle of Bordeaux with a bunch of mates. And I can still skip the light fandango.

6. Fairytale of New York
‘Fairytale of New York’ starred The Pogues and Kirsty MacColl. She was tragically killed in a water ski/swimming accident but was a terrific talent. From Croydon to Cuba: An Anthology is a must own. The video showing McColl singing with The Pogues is an experience second to none. Living in New York as I do, this song represents a fairytale story for all the immigrants who hitched up and made their homes in this most vibrant of cities.

5. Lily, Rosemary and the Jack of Hearts
How do you represent Bob Dylan in a Top 10 list? My mate, Brian Sweeney, swears by ‘Joker Man’. For me, I’ve always loved ‘Forever Young’, ‘Mr. Tambourine Man’, ‘The Times They Are A Changing’, ‘Positively 4th Street’, ‘Desolation Row’, ‘Tangled Up in Blue’ and so many others. One of the great Dylan stories is ‘Lily, Rosemary and the Jack of Hearts’. I must have half a dozen versions of this on my iPod, ranging from Joan Baez to Tom Russell, with the crème de la crème being an impromptu jam version by Mary Lee’s Corvette. But this is more than a great song, it’s also a movie. Russell Crowe as the Jack of Hearts (now that he’s earned his chops in 3:10 to Yuma, we’ll let him play the good guy), Uma Thurman as Lily, Nicole Kidman as Rosemary, and Al Pacino as Big Jim (personality, not size). There are 17 verses and I’m still waiting for the sequel.

4. Bird on the Wire
Leonard Cohen was instrumental in shaping my youth. It was very fashionable back then at Bohemian dinner parties (and if that isn’t an oxymoron, what is?) to play Leonard’s first 3 albums. I went to see him countless times, bought all his poetry and sucked up his artistic suffering. When I die, I’ve instructed for the words “I have tried in my way to be free” to be inscribed on my tombstone. It comes from perhaps Leonard’s magnum opus ‘Bird on the Wire’.

3. In Spite of Ourselves
Time for a love song – but a fresh, realistic, humorous love song. Try John Prine’s ‘In Spite of Ourselves’. He wrote a whole album about relationships and duetted with many top female singers. It’s also the subject of a great music video concert he gave at West 54th Street, and you’ve just got to listen to the words of this song. If it doesn’t have you grinning, you’re just not country. And, as a bonus, the wonderful Iris DeMent joins in.

2. The Road Goes On Forever
If you’ve ever been to hear Robert Earl Keen live, you’ll know that everyone there knows all the words to all the songs. The one they really belt out, their Shiner Bocks in hand, is ‘The Road Goes On Forever’. It is a classic romance song that should also be made into a movie. It is the story of Sunny, his girl, chivalry, loyalty, impetuosity and pragmatic reality. A great tale, a great idea, and alone is worth a trip to hear Robert Earl Keen. “The road goes on forever and the party never ends.”