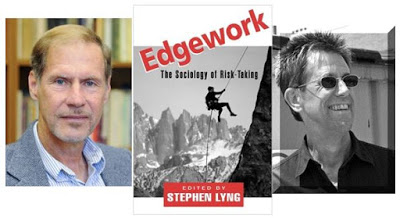 Is a life without risk worth living? Looking at the recent “adrenaline-themed” issue of lifestyle magazine Kinfolk, I came across a joint interview between sociologists Stephen Lyng and Jeff Ferrell that resonated with me deeply. In their conversation, the two professors talk the reader through the psychology of risk-taking, which they’ve dubbed “edgework,” taking the word from Hunter S. Thompson’s gonzo journalism classic, Fear and Loathing in Las Vegas.

After meeting as graduate students at the University of Texas at Austin in the mid-1970s, the two sociologists and thrill seekers began finding ways to merge their academic work with daredevil pursuits like skydiving and motorcycle racing. In the 40-odd years since, they’ve managed to develop a renowned social theory surrounding “voluntary risk-taking” activities (everything from acts of physical courage such as BASE-jumping to emotionally and intellectually daring deeds like telling your boss to piss off!).

“We learned about edgework from people doing it—we didn’t so much invent the concept as were given the concept by the people who already engaged in it,” Ferrell explains about looking at the concept of thrill-seeking from an academic perspective. “We realized the better our skills got, the more risks we could take and the more adrenaline we could pump into our systems. Theory was living in our bodies as well as our heads, and those motorcycles and the skydiving were literal embodiments of the theories we were coming up with in the library.”

As the two friends, colleagues, and adrenaline junkies make clear, they see a profound connection between risk and living life to one’s fullest, comparing a life without risk to Disneyland. “I love the idea of the consequential edge—it could be your body and your life on the line, or it could be your career, your reputation or your relationship,” Ferrell says. “If there are no consequences at stake, then there’s no possibility of edgework. . . I’ve always been much more afraid of dying of boredom than dying in a motorcycle wreck or jumping off a building.”

All this risky business could have a biological imperative, too. One of my favorite scientific theories comes from Stephen Jay Gould, who suggested that substantive change always happen at the edges, the margins, the fringes of a species. Gould’s theory of “punctuated equilibrium” explains how evolution doesn’t take place on a predictable, linear path but with unpredictable and dramatic bursts coming from the outer reaches of the species. Not incidentally, the edge also explains why New Zealand is the future.