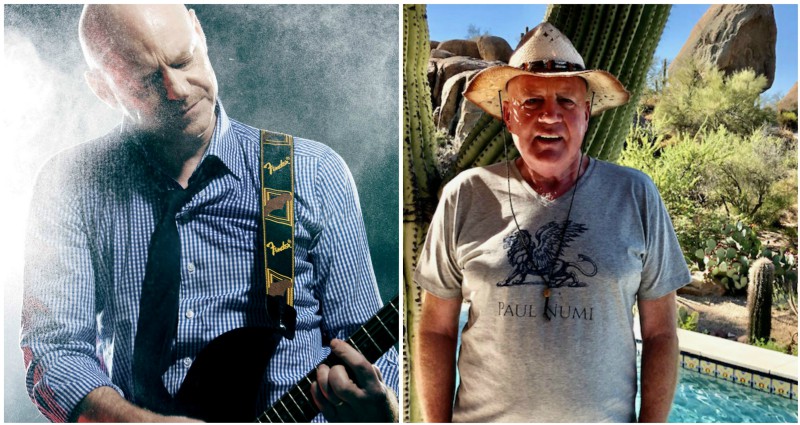 An old Procter & Gamble friend of mine – and proud Belgian – Peter Corijn has developed in parallel a brilliant music career under his nom de plume – Paul Numi.

His new album Chimera is his best yet – I’ve been playing it non-stop.

I asked him to share some thoughts about what a P&G global leader, inspirational leadership / marketing coach and Karate black belt loves about music.

What do I like about music?  For starters: “everything”.  I love the sleek design of a Fender Stratocaster, the “bursts” in the wood of a Gibson Les Paul, the jingle jangle sound of a Rickenbacker 12 string and lots more.

Nearly forty years (40!) after supporting bands like U2 and Echo & The Bunnymen, I have an indie album out again.  It’s called “Chimera”.  That means “a hard or impossible to reach goal”.  It also refers to “the dna of several beings in one”.  I always believed in being an AND person.  We can be businesspeople and indie artists, martial artists, explorers and scholars all in one.  So can you!

The album is on all streaming sites with lyric videos on YouTube.  Here’s the Spotify link: https://open.spotify.com/album/05aAM6bnHTfcbLdeW1J4Aw?si=f28nwgjJT86a6ZeJKYXaEg

We’re off to a good start with over 20,000 streams already.  That would be on the low side for Foo Fighters, but for an indie artist it’s exciting.  There’s also merchandising: just watch Kevin looking supercool in the Paul Numi t-shirt!  CD’s are also available.  If interested in merc, please contact@paulnumi.com

Here are 5 lessons from recording the album:

“You’re too old, it’s a young man’s game”, “who do you think you are?”, “nobody ever made it like that”, are just some of things you’ll hear when pursuing an audacious goal. All these criticisms may well prove to be true. But unless we go for our passion we’ll never know. It’s always better to live with the fact of having tried, at the risk of failure, than to have the regret of never having lived the dream.  The good news is: some people will step forward to support you. You never walk alone on the yellow brick road.

John Woolloff is a brilliant guitar player who a.o. supported French megastars Daniel Balavoine, Patrick Bruel and Swiss star Gölä. When I worked with him, I asked: “what’s the secret of their success?” John shared the following story:  “We had just finished recording an album for Patrick (Bruel). At the last minute, he came in with a new song. When he performed it, we felt that it was not good enough for the album. Patrick vehemently disagreed. Rather reluctantly, we recorded the song. That song was “casser la voix”, one of his major hits. Morale of the story: in the end you have to go for what you believe in.”

It took most stars years to get recognition. Before fame hit, Jimi Hendrix went to ask McDonalds each evening for the hamburgers they were throwing away to at least get something to eat.  Nirvana sold 35 million copies of “Nevermind”. In the years before that, they often had to sell the t-shirts they were wearing or beg to get some gasoline for their tour van. Many artists admit that they were close to despair before their big break came.  Define a karate black belt? It’s a white belt that never gave up.

Reviews can be brutal. A Polish friend of mine produces EDM (Electronic Dance Music). He just got this review on his latest single: “It’s a painfully boring song with monotonous vocals that sound like an Eastern European dying of typhoid fever”. Keep smiling! It’s open hunting season on social media. Everybody’s a critic. You just have to be prepared for that. Anyway, there’s no pleasing everyone.  Keep in mind that The Beatles and U2 were rejected, as were bestselling writers John Grisham (27 times!), Dr.Seuss (28 times!) and J.K. Rowling.

John, Paul, George and Ringo recorded some great songs as solo artists. But together they were The Beatles, the world’s greatest band ever. Sgt. Peppers is still hailed as the greatest rock album of all time (Rolling Stone Magazine).  As a band, they were more than individuals. That’s what great teams do. Their different personalities, profiles and strengths re-enforce each other. There was also a 5th Beatle: Sir George Martin, the producer. It’s essential to create a support team. It makes the sum bigger than the individual parts. Bowie was highly talented but he also benefitted from Brian Eno as producer and the guitar genius of Mick Ronson.

One more thing: “The Sparkle in my life, the fire roared, it scorched my soul, but boy I felt alive” (Paul Numi):

Will my album be a hit?  I don’t know.  Maybe I’m indeed chasing a “Chimera”.  But perhaps the fact that it brought sparkles in my life is reward enough.  Just to say, we also need to enjoy the road.  Of course, I do hope my album will become part of the soundtrack of your life!  Do let me know what you think about the songs!

Bio: Paul Numi (a.k.a. Peter Corijn) is CEO of VUCASTAR Consulting.  Before he had senior executive roles in several multinationals.  He is a black belt karate and Krav Maga practitioner.  He loves exploration, books, is a business writer, indie artist and father.