Home / Blog / It is not the Mountain We Conquer, but Ourselves.

It is not the Mountain We Conquer, but Ourselves. 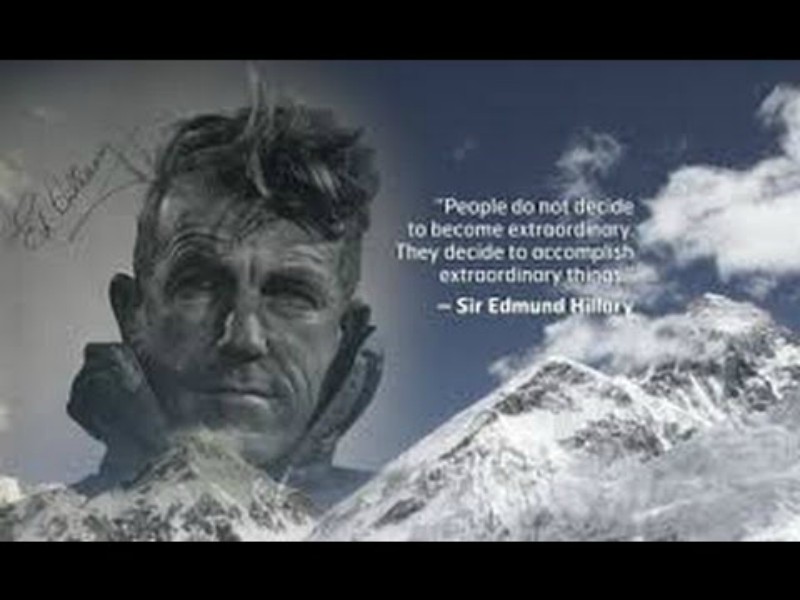 Almost 20 years ago I got to meet and then spend several Saturday mornings with one of the greatest leaders I have ever met, Sir Edmund Hillary.  In January 2000 he was kind enough to write the foreword to the first book I wrote with three colleagues from Waikato University – Peak Performance, Lessons from the World’s Greatest Sporting Teams.

Sir Ed passed away in Auckland on the morning of January 11, 2008.  He would have been 99 years old had he still been with us, and 2019 will be the centenary of his birth.

10 years ago I was invited to become a Governor of the Hillary Summit – a group of people coming together to recognise and support exceptional international leadership in mid-career, those who are in the game and can contribute more with peer support, advice, counsel, leverage and good-will.

We are just voting for the 2018 Hillary Laureate as we speak and it took me back to the mornings I spent in Sir Ed’s home talking to him about his experiences, his ideas and his beliefs.

Here’s an extract from the Hillary Institute’s Annual Report on a great leader.

SIR EDMUND HILLARY personifies essential human qualities of integrity, modesty, determination and service to others born of a life-time of exceptional achievement. He was raised in a quiet country town at the bottom of the world in New Zealand, and this unremarkable schoolboy discovered early a love of mountaineering which ultimately led to his becoming an international legend as the first man to climb Mt. Everest in May 1953 with Tenzing Norgay, Sherpa.

For the last 50 years he not only continued to lead expeditions to the most remote corners of the earth, but perhaps most tellingly, devoted himself to environmental and humanitarian efforts that have made a profound difference to the Sherpa communities where his famous summit climb was achieved.

In 2003 Sir Edmund and Lady June Hillary celebrated the 50th Anniversary of the ascent of Everest in Nepal, with Sherpa friends and the Tenzing family, and in 2005 he formally re-embraced leadership development as the patron of the Excelerator: New Zealand Leadership Institute, and internationally through lending his name to the development of the Hillary Institute and its associated Awards programme.

Knighted by Queen Elizabeth II in 1953 Sir Edmund was the recipient of numerous international citations including The Order of New Zealand, his country’s highest honour. He has also been awarded nine honorary doctorates and was the author of eight books. In January 2007 Sir Edmund returned to Antarctica for the final time for the 50 years celebration of his establishment of Scott Base for New Zealand. With Sir Ed in honoured attendance Prime Minister Helen Clark (as patron), formally launched The Hillary Institute there on January 22nd.

New Zealanders take great pride in this extraordinary, ordinary man, a world-wide symbol of courage, determination, leadership and humanitarian service. With the centenary of his birth looming in 2019, he will forever be an inspiration to us all.