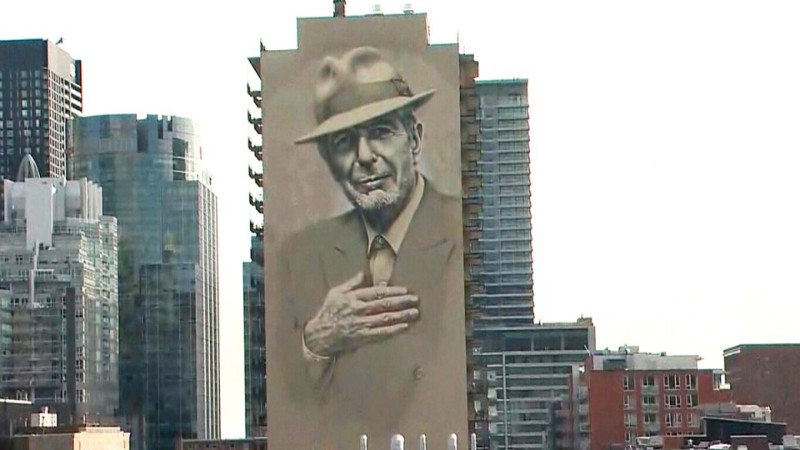 I spent a wonderful three days with Ludia, a brilliant video game outfit, in one of my favourite cities, Montreal last week.

I was able to see the mural of one of my all time heroes, Montreal’s own Leonard Cohen, on a 20 floor apartment building on Crescent Street – 8,500 square feet.  Leonard’s heart, soul, humility and charisma captured for all of us to share.  Painted by El Mac and Gene Pendon, the mural is based on a 2008 photo taken by Leonard’s daughter Lorca (it was actually taken on Crescent Street).  Field Commander Cohen in his second coming, fedora and peaked lapel suit jacket to the fore.

Leonard looks down on the Sir Winston Churchill pub, the Copacabana Club and a bunch of pubs, bars and restaurants – all reminiscent of Famous Blue Raincoat’s opening “It’s four in the morning, the end of December, I’m writing you now to see if you’re better, New York is cold, but I like where I’m living, there’s music on Clinton Street all through the evening”.

And then the barman in Maison Boulud told me there was another mural of Leonard – on Napoleon Street, near Cohen’s home in Plateau Mont-Royal – nine stories high painted by Kevin Ledo.  Here it is: 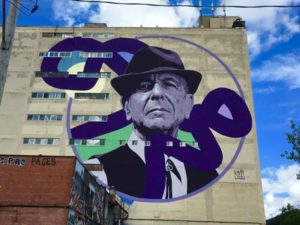 Amazingly the two murals were developed, and finished without either party being aware of the other project.

So, now we have two – “I love to speak to Leonard, He’s a sportsman and a shepherd”.