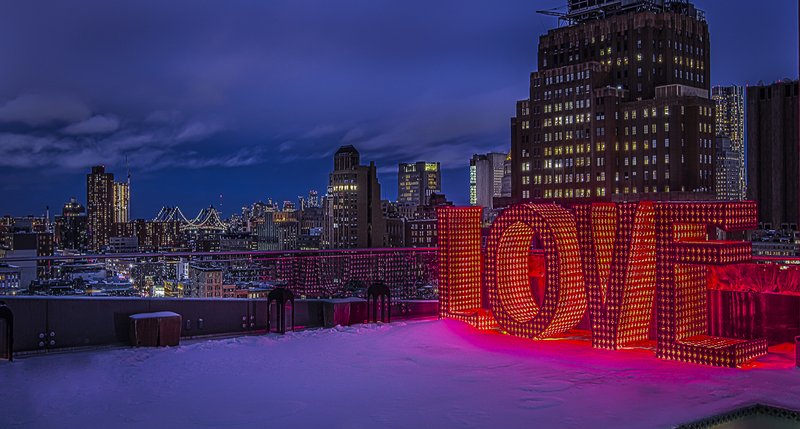 Laura Kimpton is a California-based, American contemporary artist. She is known for her Monumental Word series including installations at Burning Man and now on the rooftop of the James Hotel near my New York home in Tribeca. “LOVE” is right in my wheelhouse. Other words in the series include “BELIEVE”, “LIVE”, “MAGIC” and “DREAM.” Kimpton reportedly liked the juxtaposition of LOVE seen together with the Freedom Tower in an outside location and has said that she sees herself as the messenger of love in a time when there is so much hate in the world. Her website states that “her creativity stems from a desire to question traditional views on social interaction, therefore invoking through her art a reaction from her viewers that ultimately completes her projects. She is continually exploring new mediums in her search for revelatory communication.”

“Hotel art” has a pejorative reputation in the serious art world, considered facile, derivative, and inoffensive decoration bought through commercial art consultants and hyped by PR agencies who are unfamiliar with art history or the aesthetic or philosophic significance of real art collected and curated by scholars for top tier museums and art collectors. But a few hotels have managed to transition beyond this line and acquire serious art to share it with the public.

“Kimpton is fascinating because, as an outsider artist, she refuses to be put in a box or to pander to commercial galleries, or what she calls “an art world run by left-brain people, running a right-brain world.” Her use of sparrows in LOVE came from living in Siena, where sparrows flock in great numbers, and this led to her realization that “you are free to love anything you want – especially yourself.” The word “love” takes on multiple meanings through Kimpton’s use of the cut-out birds, so that “love” is not restricted to just monogamous romantic love, but represents a flight of fantasy into a more universal feeling. Like Alice she riddles the meanings of words, on the “other side” of left brain logic. Although I was apprehensive about viewing “hotel art,” I came away from this experience uplifted. After talking with Kimpton in-depth, I had no doubt that she is an authentic artist.”

And here is the third connection, hotels, of which I know more than a bit as a global resident and consultant:

“Kimpton’s journey began as an insider within the hospitality industry as the daughter of a hotelier, Bill Kimpton, who made his name refurbishing run-down buildings in urban areas and collaborating with innovative chefs like Wolfgang Puck to create exciting hotel restaurants. While Kimpton understands this industry implicitly, thanks to her innovative father, she also comes from a strong art and psychology background, having earned both a BFA from San Francisco Art Institute and an MA in Counseling Psychology from the University of San Francisco. Kimpton has worked on the periphery, yet she has also been accepted by the art establishment that collects her work.”

Laura Kimpton’s work is being shown by HG Contemporary on West 23rd Street, New York, starting on May 4th, 2017.