Home / Blog / From the Mouse House to the All Blacks

From the Mouse House to the All Blacks 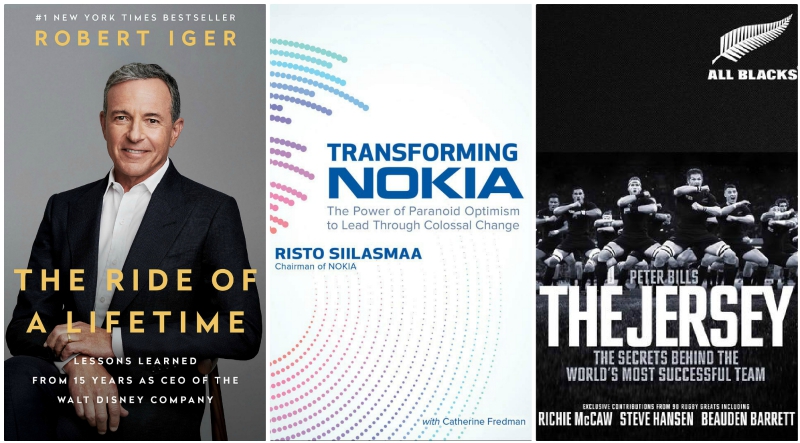 I read three books around Winning, Leadership, Values, Beliefs and Success over the Christmas break in our home in Carefree, Arizona (a brilliantly named town!!).

The first was by Disney CEO Bob Iger – I wrote about this on January 7.  I was a fan of his predecessor Michael Eisner – a creative powerhouse who ultimately fell victim to his own insecurities, but his more balanced, more thoughtful and more open successor Bob Iger has delivered in spades.

‘The Ride of a Lifetime’ – is just that.  A captivating blockbuster of deals, characters, choices and stars – all written around leadership lessons he learned the hard way and all of which are relevant to businesses/companies no matter how big or how small everywhere.

I was recommended the second book by a Finnish TV Producer friend of mine who is driven by the transformation happening in his industry – TV – at every level.  It’s a dry delivery of a powerful story.  ‘Transforming Nokia’ by their Chairman Risto Siilasmaa.  If you’re faced with Apple, Samsung and co and the Barbarians are at the gate, then this book is for you.  And even if you’re not today, you will be soon.  So this book is worth a look.

In 2008 Nokia owned 50% of the global smart-phone business.  In 2012 they had less than 10% and were virtually bankrupt.  Risto took the helm, re-imagined the Company through the power of ‘Paranoid Optimism’ and saved and reframed the Company into a sustainable, global leader in a new industry.

This is a reminder to all of us that in a VUCA world, leaders must constantly challenge assumptions, look for new opportunities and lead with an entrepreneurial mindset – no matter how successful the Company might be.

And finally on to the third book.  ‘The Jersey: The Secrets Behind the World’s Most Successful Team’, written by Peter Bills.  Despite England’s well-deserved Semi-Final win in Japan, the All Blacks are the greatest sporting team on the planet.  They have a superior win record to any other team in any sport in history.  Bills was given unprecedented access to all the key figures in NZ Rugby as he set out to understand the secrets behind the AB’s sustained success.  I wrote about this in Peak Performance – Lessons from the World’s Greatest Sporting Teams 20 years ago in 2000, and James Kerr wrote about it in Legacy in 2013.  Peter’s book lays out the principles and values that drive winning and success in a way relevant to all of us.

If you have time to learn, time to invest in yourself, time to become a better leader, then take a look at whichever of these books takes your fancy.