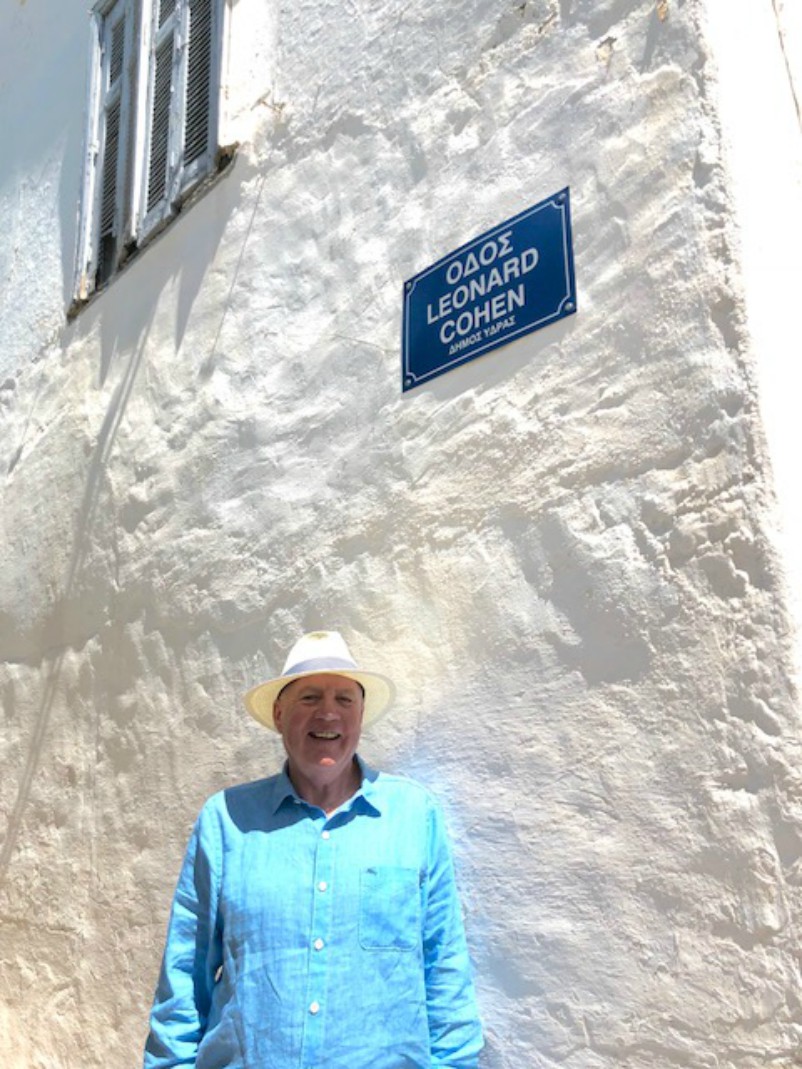 On September 27 1960, Leonard Cohen bought a house in Hydra for $1,500 using a bequest from his grandmother.  The three-storey, 200-year-old whitewashed building had 5 rooms, a large outdoor terrace, no electricity, no plumbing, no running water.  Leonard lived here for more than 10 years and never sold the house.  It was a place of tranquility, donkeys (even today no cars are allowed on Hydra, voted the most beautiful island in Greece and the 11th most beautiful in the world), the Aegean, wine, songs and creativity.  ‘Bird on the Wire’ and ‘So Long Marianne’ were written here.

I grew up with the legend of Leonard in Hydra, and earlier this week I finally got to experience it at first hand.  His favourite haunts are still there, Roloi Café where his first ‘concert’ took place with only a dozen friends in the audience, and The Pirate Bar (O Peiratis) in the Port.

We trekked up to his house.  (Son Adam just recorded an album there.)  It’s unmarked.  Unspoiled.  And the telegraph pole/wire that inspired ‘Bird on the Wire’ stands tall in the April sunshine.

“Greece is a good place

to look at the moon, isn’t it?

You can read by moonlight

You can read on the terrace

You can see a face

As you saw it when you were young”

Muse Marianne died in Summer 2016 from leukemia, 81 years old.  Leonard wrote her as she lay dying:

“Well Marianne it’s come to this time when we are really so old and our bodies are falling apart and I think I will follow you very soon.  Know that I am so close behind you that if you stretch out your hand, I think you can reach mine.  And you know that I’ve always loved you for your beauty and your wisdom, but I don’t need to say anything more about that because you know all about that.  But now, I just want to wish you a very good journey.  Goodbye old friend.  Endless love, see you down the road.”

His spirit lives on.