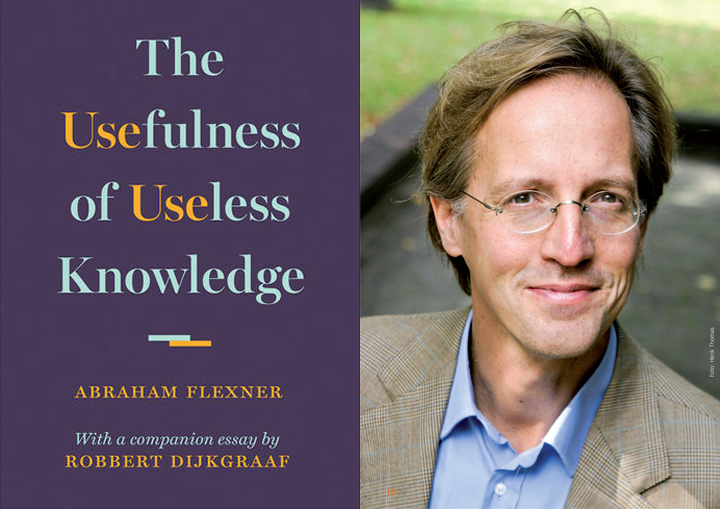 ROI – Return on Investment – is one of the epic idea-killers in the corporate playbook. Initiatives to engage in pure research, and creativity for the sake of it, usually get quashed at the starting gate by the ‘Abominable No Man.’ In my early years of leading Saatchi & Saatchi I asked a searching question “What comes after brands?” I didn’t ask for a business plan, a delivery timetable, or an implementation matrix. I just wrote a check, and another one, and another…the result was Lovemarks and it was a sustaining idea for the company for several years.

“The Usefulness of Useful Knowledge” is a small book with a big message by Robbert Dijkgraaf, a mathematical physicist who specializes on string theory. He is Director and Leon Levy Professor at the Institute for Advanced Study at Princeton, established in 1930 with Albert Einstein as one of its first professors. The first half of the book comprises an essay by Dikjgraaf, followed by the 1939 essay “The Usefulness of Useful Knowledge” by the IAS’s founding director Abraham Flexner. Both essays are passionate and powerful advocacies for the unobstructed search for “answers to deep questions, motivated solely by curiosity and without concern for application.” Such a source “often leads not only to the greatest scientific discoveries but also to the most revolutionary breakthroughs. In short, no quantum mechanics, no computer chips.” Some choice quotes from Dikjgraff’s essay:

“In the early twentieth century study of the atom and the development of quantum mechanics were seen as a theoretical playground for a handful of often remarkably young physicists with little immediate consequences. The birth of quantum physics was long and painful. However, without quantum theory, we wouldn’t understand the nature of any material, including its color, texture, and chemical and nuclear properties. These days, in a world totally dependent on microprocessors, lasers and nanotechnology, it has been estimated that 30 percent of the U.S. gross national product is based on inventions made possible by quantum mechanics.”

“The life sciences provide perhaps the richest source of powerful practical implications of fundamental discoveries. One of the least known success stories in human history is how over the past two and a half centuries advances in medicine and hygiene have tripled life expectancy in the West…We should never forget that these groundbreaking discoveries, with their immense consequences for health and diseases, were products of addressing deep basic questions about living systems, without any thoughts of immediate applications.”

“There is a famous, but most likely apocryphal, anecdote that when William Gladstone, then the Chancellor of the Exchequer, visited the laboratory of Faraday in the 1850s and inquired what practical good his experiments in electricity would bring the nation, Faraday answered, “One day, Sir, you may tax it.” The equations were never patented, but it is hard to think of any human endeavor that doesn’t make use of electricity or wireless communication. Over a century and a half, almost all aspects of our lives have literally been electrified.”

“The Usefulness of Useful Knowledge” is a call for courage: for leaders, investors, financiers, government ministers and policy-makers…to just write the check.