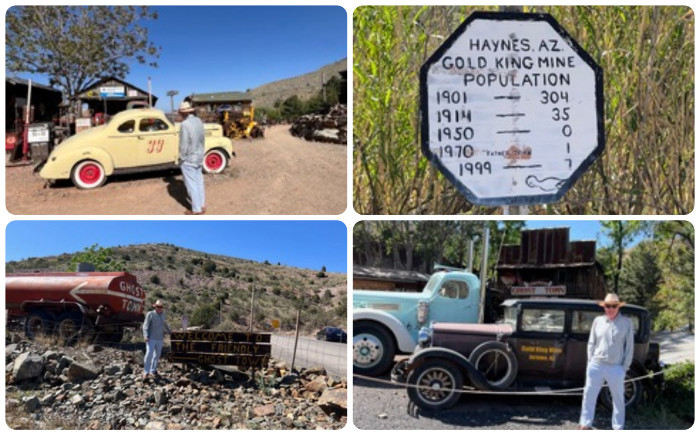 A lazy Spring Sunday in Arizona – Trudy and I drove two hours to Jerome.  A roaring copper mining boomtown in 1883 proclaimed in 1903 by The New York Sun as the “Wickedest City in the West”.  (Evidenced by the Sliding Jail which is still standing and the Bordello – still a saloon.)  Settled in the 60’s by artists, hippies and hermits, and still offering an authentic (pre-Disney!) insight into life in the Old West.

Americans, Mexicans, Spaniards, Italians, Irish, Croatian, Chinese and 20 other nationalities made up the Mining Camp – which they called Haynes – and which made Jerome home to a town full of excitement; full of miners, adventurers, gamblers, bootleggers, saloon-keepers, prostitutes and preachers.  Jerome was the talk of Arizona – the boomtown of its time.  A billion dollars of copper was mined there along with gold and silver – it became the fourth biggest city in Arizona.  The fires and dynamiting hit and entire parts of the town collapsed into the mountain or slid downhill, including the famous Sliding Jail I mentioned moving 225 feet!

The town was reborn in the 60’s as the Counter Culture renovated homes and opened abandoned shops to sell their creations.

It’s worth a visit.  Within a couple of hours from our home in Carefree and close to Sedona, Prescott and Flagstaff.

And the Gold King Mine Ghost Town is open – one mile away.  The one-room school-house, the ‘Painless’ Dentist office (I don’t think so), the original deep mine shaft and plenty of old trucks, cars, tractors, implements (including a super-cool 1939 Studebaker Cruiser Commander) are all there.